Thammasat Medical Journal: The historical and personal perspective from the first editor

When I was asked about my success as an academician, Thammasat Medical Journal is definitely one of them. Surprisingly, I was asked by the current editor to write an article about our beloved journal because many readers may not know about its historical perspective.  The project for this journal was initiated in 1999 by Dr. Kammal Kumar Pawa, the Dean of Thammasat Medical School at that time. He asked me, who was a young staff in Internal Medicine department and just returned from my training in the US, to be the first editor. It was very hard at the beginning to brainstorm and find the “identity” of the journal. With lots of help from my parties involved, the first issue was published in October 2000. There were three original articles, and three review articles. It was an instant success, at least to the Thammasat community to recognize our leadership in pursuing the quality of research and our attempt to make our medical school more visible to the public. Originally, it was planned to have three issues a year and later increased to four issues a year. 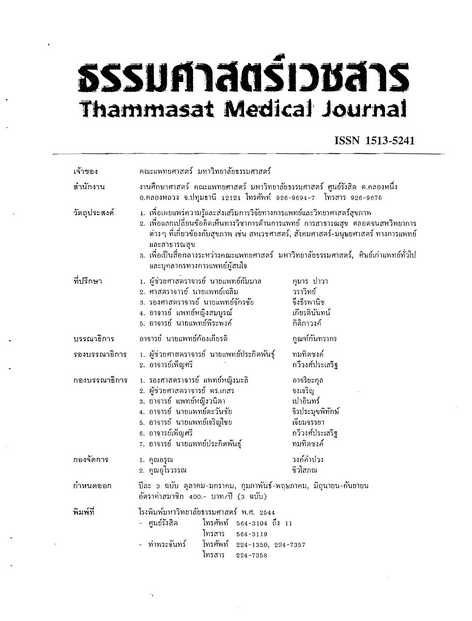 As the first editor, it was difficult to get the articles from the researchers and potential contributors. I often begged for good articles my colleagues, friend and networks to complete each issue. The editorial support staff was very limited and quite new to the job. Training and coaching were essential to improve the working process and their skills. Additionally, I was also responsible to do the journal supplement for the Faculty annual meeting which was the extra task. The articles were in both Thai and English to balance between the authors’ skill and the requirement. This journal had served as a launching pad for many well-known academician nowadays.

Three years later, I have met Professor Somchai Bovornkitti, the world renowned pulmonologist and Royal Society member who kindly advised and provided tremendous support for the journal. He had been instrumental in shaping the journal to the standard format and linking me to many academicians from other institutions via the medical dictionary committee of the Royal Society.

On the personal side, this was extra and behind-the-scene task which had taken a lot of my time to edit, reformat and sometimes rewrite the submitted articles. At times, it was quite stressful to finish each issue to be published on time while I needed to complete my routine job and research projects. I always felt relieved and joyful when each printed issue was in my hand. Many outsiders may see that editorial job is an easy one. But for myself, it is very challenging and time consuming. Each article must pass at least 5 times through my own review process, not including a few more times for the editorial staff and reviewers. I also needed to keep up on each field to provide timely review and valuable feedback to the authors.

With its consistency and quality of published articles, the journal had been growing very fast and has been more widely accepted to the public. It was listed in the tier 1 of Thai Journal Citation Index (TCI) and the citation index has been rising as well.

After 12 years of being the editor, I thought that new generations had to come in and lead the journal. With the support from the Deans (Associate Professor Chittinad Havanond and Professor Preecha Vanichsetthakul), I handed over the editorial task to Prof. Surasak Buranatrevedh to start his first issue in 2012. 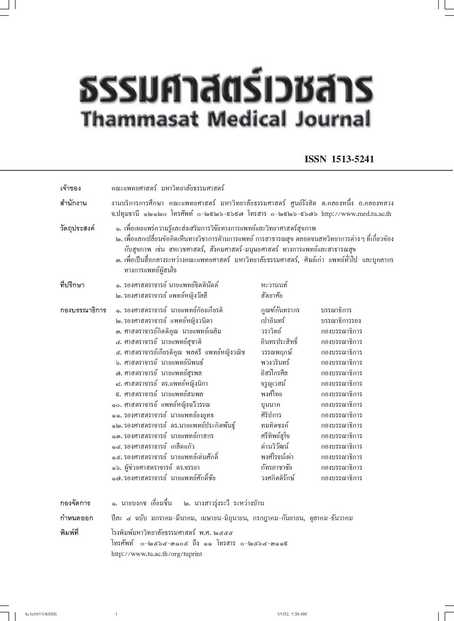 Lastly, I would like to thank the past Deans, our reviewers, authors and editorial staff to make this project possible and successful. I am sure that the current editor (Professor Anucha Apisarnthanarak) will bring the journal to the international one level within the upcoming years.