The comparative study of the effi cacy and side effect of Prasaplai extract versus Mefenamic acid on relieving primary dysmenorrhea.: A clinical phase II trials.

Objective: To study the effi cacy of pain relief and side effects of ethanolic extract of prasaplai on relieving primarydysmenorrhea comparing with mefenamic acid.

Results: There were 64 volunteers who were recruited and randomly divided in 2 groups. The result revealedthe fi rst group (32 volunteers) was given prasaplai. The second group (27 volunteers) was givenmefenamic acid as there were 5 volunteers dropped out. After the two groups were completedmedication in 3 months, there were no change of other symptoms and signs. Blood chemistry, liverfunction test and renal function test showed within normal limit. The effi cacy of pain relief in givenprasaplai and mefenamic acid groups showed that the pain decrease was statistically signifi cant differentduring treatment and follow up, comparing with baseline (p < 0.05). Comparing the effi cacy of painreduction between both groups showed that the mean of pain level decreased with no signifi cantdifference. For side effects only occurred in mefenamic acid, especially gas pain and discomfort.In addition, the group was given prasaplai had no severe side effect. Only one case complainedof plai’s smell.

Conclusion: The extract of prasaplai reduced dysmenorrhea as effective as mefenamic acid (with no signifi cantdifference) even stop medication for 1 month. Pain symptom and side effect in taken the extractvolunteers were less than mefenamic acid group. 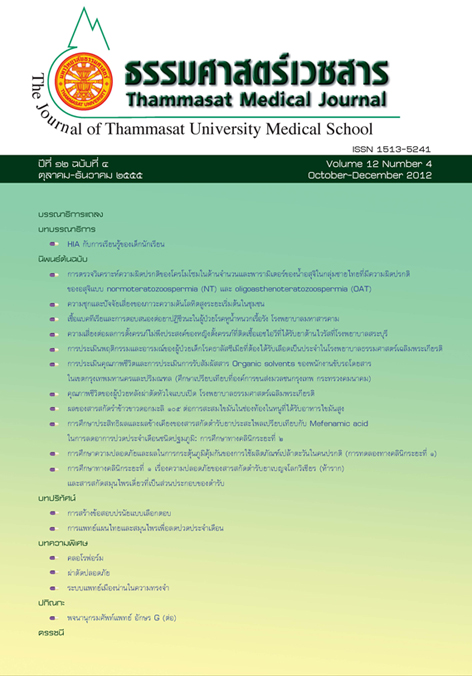