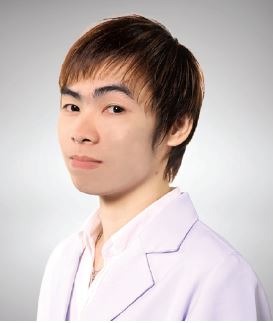 OBJECTIVES: Whole spine radiographs are common procedure in routine practicefor scoliosis patients. The incidence of repeated radiograph is a point of awareness-raisingfor increasing radiation dose, increasing cost, and rising procedure time. A pelvicradiation shielding plays an important role to protect the gonads and decreased incidenceof repeated radiographs. That leads to an innovation of the new shielding: safe anduser-friendly, from our department.

MATERIALS AND METHODS: A suitable shape for the new shielding of the pubicarea is an inverted triangular shape. Its sizes were calculated from the measured parametersof pelvis anteroposterior (AP) radiograph as width of pelvic cavity, length of handlingshielding from iliac crest to the widest point of pelvic cavity for female, and height fromiliac crest to superior rim of pubic symphysis for male. Then, two sizes of rubber belt(length of handling shielding) for the shielding were made; 10 cm and 20 cm for femaleand male, respectively. The new lead plate was used in routine whole spine radiographsfrom June 2016 to April 2017. The repeated radiograph (rejected rate), rate of routineprocedure time, rate of satisfactory to the new lead plate of radiologic technologists,and cost of repeated radiograph of whole spine (expense) were recorded during thewhole period and sub-period.RESULTS: The rejected rate of whole spine radiograph is less than 5%. The rate ofroutine procedure time within 4 minutes reached 95% in four months. The rate ofsatisfactory response to the new lead plate by technologists was about 85.2% in the firstmonth of practice. Finally, cost of repeated radiograph of whole spine (expense) decreasedabout 65% in ten consecutive months.