Background: The occurrence of auricle keloid scar is a common disease in OPD examination.  At present, there are many methods of treatment, such as steroid injections, surgery, chemotherapy , radiation therapy , etc. , which are mostly a combination of treatment methods. It was found to be more effective in treating and preventing recurrence of keloid scars than choosing either method.  Now, Platelet rich plasma (PRP) is used in the treatment of various scar formations. Therefore, the researcher has used PRP compounds in combination with other treatments in patients with keloid scars on the auricles. Then study of PRP effectiveness and complication.

Material and method: The study selected participants according to established criteria. Outpatient treatment is recruited with problems with keloids in the auricle due to various causes during 2013 to 2021. Found that a total of 67 patients received treatment by the researcher. The study was divided into two groups, where 37 patients were treated surgery and postoperative steroid injection (control group) and group 2 were treated with surgery, intraoperative PRP injection and postoperative steroid injection (test group) 30 patients and follow up appointments were made at 1 week, 1, 3, 6 month , 1, 2 and 3 years after surgery. With a record of treatment results and recurrence of keloid scars at the suture site. Include any complications that occur. 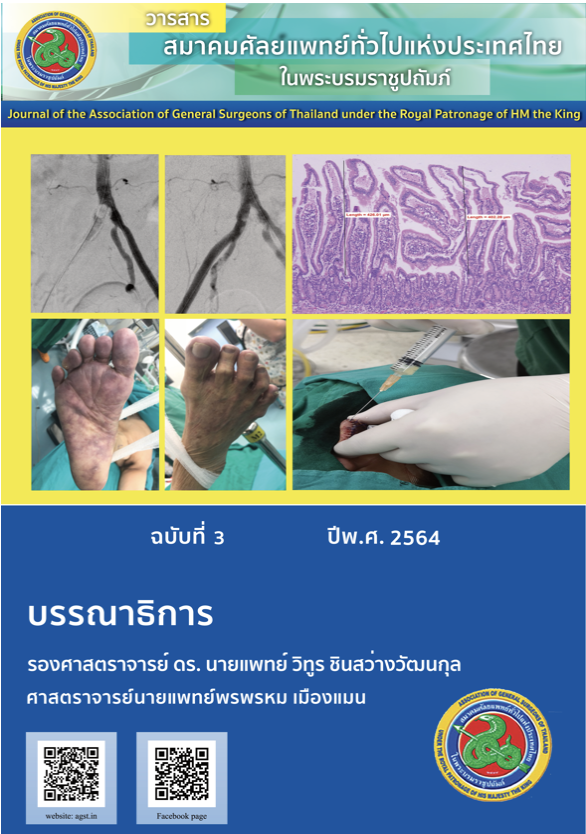 Chaisupsathaporn, S. (2021). The Evaluation of Platelet rich plasma (PRP) injection for decrease recurrent keloid of ear pinna. Journal of the Association of General Surgeons of Thailand under the Royal of Patronage of HM the King, 6(3). Retrieved from https://he02.tci-thaijo.org/index.php/agstjournal/article/view/254259
Download Citation 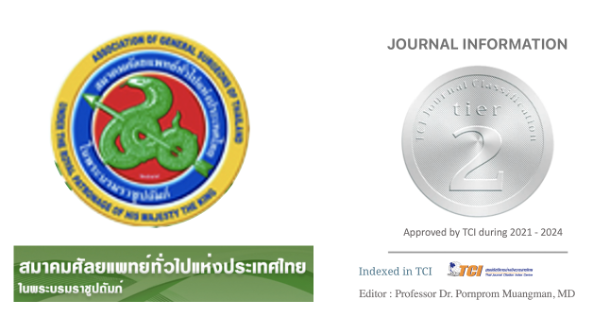