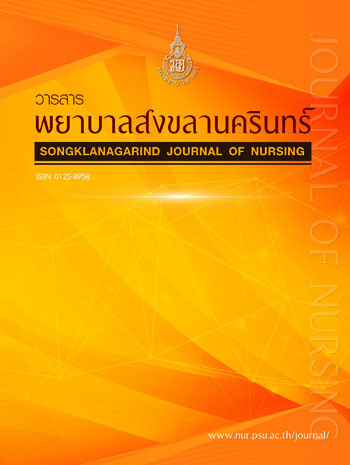 The purpose of this research was to develop a model of health promotion for adults in urban
workplaces. This participatory action research was conducted with the 20 employees of the Wangkanai
Group were at risk of chronic non-communicable diseases. The employees were purposively selected as
research participants from November 2013 to December 2014. The processes of this study consisted of three
phases described as follows: 1) Preparation for Participation Phase. 2) Research Phase and. 3) Monitoring
and Evaluating Phase. The research tools comprised of the demographic record forms, the diabetes risk
assessment form in the next 12 years with a sensitivity of 76.50 % and specificity of 60.20 %, the health
diaries, and tape recorder, an in-depth interview questions were based on 3 self-concepts of health behavior,
guideline questionnaires regarding health behaviors of people at Wangkanai and health assessment instruments,
which were prepared and verified in compliance with the public health center. The researchers collected data regarding research participants’ intial health check and health assessment, after 3 months and after 6
months respectively. After 3 months of behavior modification, the researchers interviewed the participants
individually using structural questions according to health behavior modification for the Wangkanai employees
based on 3-self health principles. There was also a focus group discussion about the result of changing
health behaviors of Wangkanai Group’s employees after 6 months. General data were analyzed using basic
statistics. Individual health status changes were analyzed initially, after 3 and 6 months, and the qualitative
data were analyzed by content analysis. After classifying the patterns of health behavior modification, the
lessons derived to create a model for health promotion. The results indicated that health status compared to prior to participation in the study in the third
month, and after completing the project in the sixth month, revealed a change in waist circumference for
45 % of research participants and the BMI 30 % of research participants had declined throughout the study.
Five percent of participants had the positive level of all three lipid profiles throughout the study. Ten percent
of research participants had higher blood HDL level throughout the study. Fifty percent (one half) of research
participants who had blood sugar level higher than normal were able to control blood sugar level which
dropped throughout the study. There were two research participants who had systolic blood pressure higher
than 140 mmHg at the beginning of the study which decreased throughout the study. One of these two had
systolic blood pressure which decreased to the normal level when the research was complete at the sixth
month.
Considering the health data throughout the study, patterns of health behavior modification could be
identified into three groups: the successful group, the unstable group, and the unsuccessful group. Lessons
can be derived to create a model for health promotion. Since everybody wanted to have good health for his
or her own well-being, Iddhipada 4: the path of accomplishment was the first mechanism of the journey to
success. This was used to practice along with the second mechanism, the 3-self health behaviors. The 3-self
health behaviors referring to the intention of taking care of own health (self-care), believe that one can
behave (self-efficacy), and can be self-directed (self-regulation). People will behave to promote their own
health through these two mechanisms all the time. This will proceed until strong and sustainable practices
to reach achievement in health promotion are maintained. Although there might be some barriers, like stress
from one’s lifestyle to the practice which lead to such well-being, such negative influences will be decreased
by Iddhipada 4, and positive empowerment could be created through discovering reality, critical reflection,
taking charge, and holding on until success.
The researchers suggests to modify the concepts of health promotion from passive to active by
assigning hosts or leaders at the action level such as a health authorities regarding the context of each area.
In order to implement active health promotion, the hosts or the leaders must be able to adhere to monitoring
and actively promoting better health with the solid solutions.