Hypertension is a silent killer and is a major cause of increased morbidity and mortality. Prevention of illness by encouraging practical behaviors is important to reduce risks, decrease the cost of treatment and prevent the complications that will occur. The purpose of this quasi-experimental research was to determine the effects of a hypertension prevention program on practical behaviors and blood pressure levels. The study included a purposive sample of sixty high-risk hypertensive subjects living in Nam Ang suburb, Tron district, Uttaradit province. The sample was selected using the inclusion criteria of persons between the ages of 35 and 59 years of age, with systolic blood pressure between 130 and 139 and/or diastolic blood pressure between 85 and 89, that had never been diagnosed as hypertensive, could speak and write in Thai, and were not pregnant. Subjects were divided into experimental and control groups with 30 people per group. The Neuman System Model guided the intervention for the experimental group and included participation in an eight-week hypertension prevention program. The control group received regular care. Research tools consisted of a reliable and valid. Content validity was more than .50, confirmed by IOC. The Alpha Cronbach’s reliability was .92. A Practical Behaviors Questionnaire (PBQ) and a blood pressure recording form were utilized in BP monitoring. Data analysis used descriptive statistics such as mean, percentage, standard deviation, paired t-test and independent t-test.

Sitthikhungaew, M., Chintanadilok, N., Sangperm, P., & Pornchaikate A. A. (2012). Relationship between Perceived Stressors and Depressive Symptoms in Adolescents with Thalassemia. Journal of Nursing Science, 30(3), 25-35. (In Thai)

Thatsaeng, B., Lasuka, D., & Khampolsiri, T. (2012). Effects of a self-management supporting program on self-management behaviors and blood pressure among elders with hypertension. Nursing Journal, 39(4), 124-137. (In Thai) 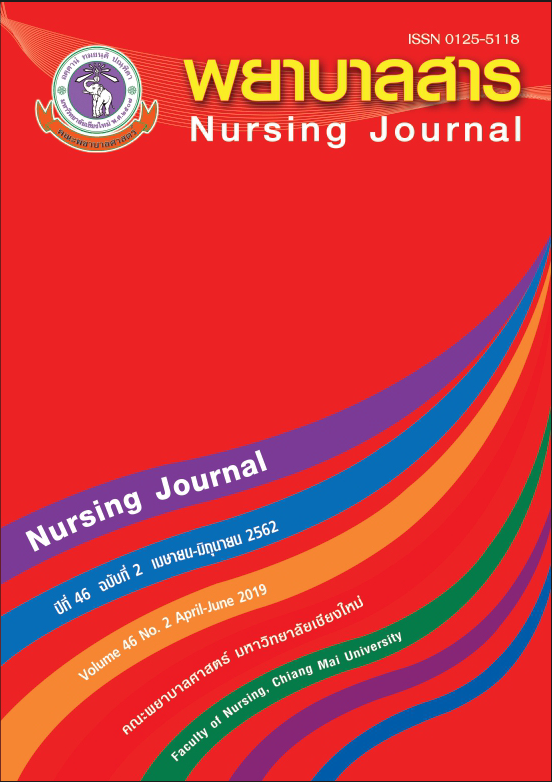