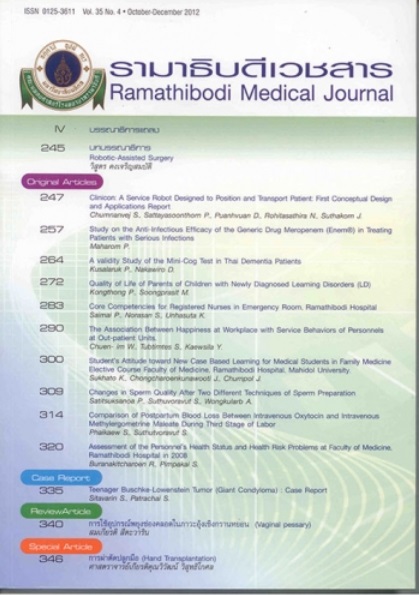 Method: This descriptive research included the sample of 43 registered nurses. Subjected were asked to self-evaluate their competency levels using a questionnaire. The questionnaire was modified by Krongdai Unhasuta and Thai Trauma Nurse Network. The reliability was obtained by means of Cronbach’s alpha coefficient, which gave a value of 0.98. The data were analyzed in terms of frequency, mean, percentage, Standard deviation and Spearman rank correlation coefficient.

Conclusions: The ability base on core competency for registered nurses in trauma care was high level. Suggestion the head nurse uses the result this study for participate evaluation to decrease weakness point such as the problem solving, decision making and technical knowledge that there was lowest score level will played attention to develop the first priority and sustain the strengthening point.

6. Dangsuwan K, Boonyoung N, Apichato A. Core competencies of accident and emergency nurses as perceived by nurses in hospitals under the Ministry of Public Health in the three southern border provinces. Songklanagarind Medical Journal. 2008;26(3):227-237.