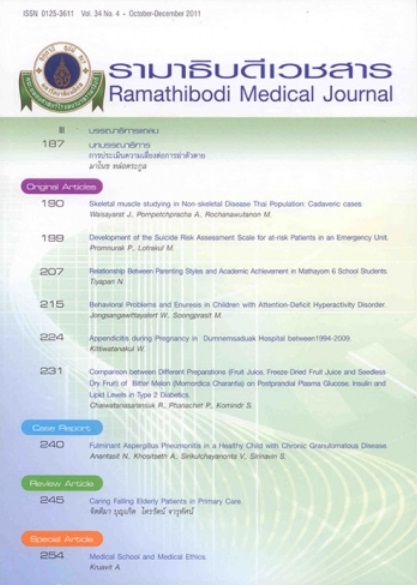 Objective: To develop the suicide risk assessment tool in order to improve screening of at risk patients in an emergency unit.

Method: Checklist items were developed from previous suicidal risk studies. The scale contains 13 items assessing imminent suicide risks. After examined and re-corrected some contents by the experts, the assessment was tested at an emergency unit, Faculty of Medicine Ramathibodi Hospital. A patient at an emergency unit who was considered by an internist that psychiatric consultation was needed was examined by a sixth-year medical student using the suicide risk assessment scale. Second to fourth year psychiatric residents evaluated patient’s suicide risk without knowing the result of the scale.

Results: Sixty patients were assessed by the scale. Item-total correlation of each item ranged from 0.32 to 0.72. The internal consistency reliability of the scale was demonstrated with Cronbach’s alpha coefficients of 0.70. The optimal cut-off score of scale ³ 5 revealed a sensitivity of 1.00, specificity of 0.57, positive predictive value (PPV) of 0.29, negative predictive value (NPV) of 1.00. The area under the curve (AUC) in this study was 0.80. The total score of patients with low, moderate and high risk were significantly different (P = 0.003).

Conclusion: The suicide risk assessment scale is a valid measure for using in monitoring, management and discharge planning of patients at an Emergency Units. Further studies with more samples are suggested to explore the applicability of the scale in various clinical settings.

9. Practice guideline for the assessment and treatment of patients with suicidal behaviors. Am J Psychiatry. 2003;160(11 Suppl):1-60.