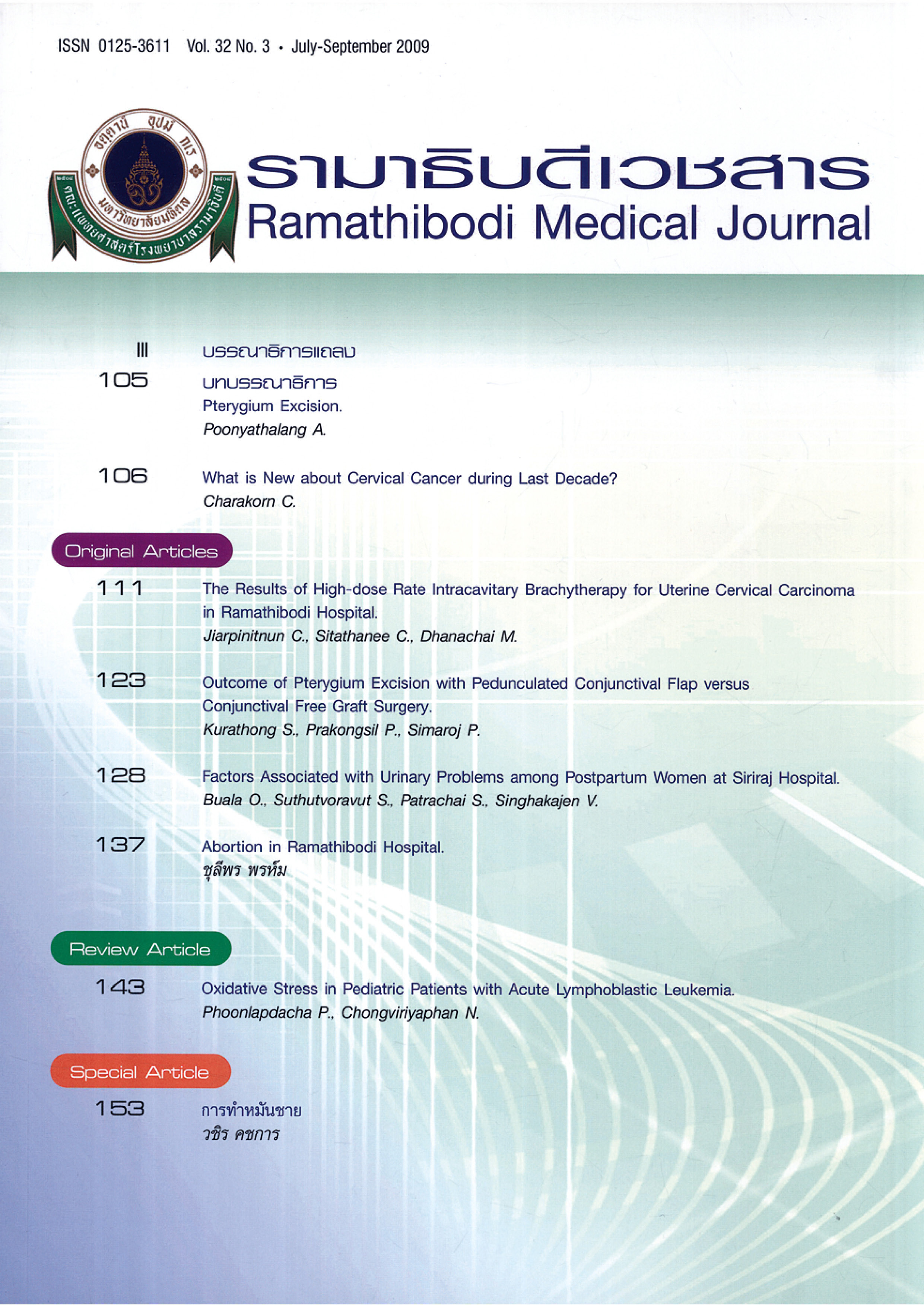 One of the most common ocular surgical complications is recurrent of pterygium after pterygium excision. Commonly known that ultraviolet is the cause of pterygium, prevention of the eye by sunglasses has always been recommended. However Thai people are very shy, they are afraid to wear sunglasses in public. High recurrent rate after pterygium excision therefore, are commonly found in our country. Many treatments had been studied in order to reduce the high recurrent rate such as topical Mitomycin-c, beta radiation, sub conjunctiva injection of steroid or injection of Bevazicumab. Even though these treatments proved to be effective, they also have some serious complications. Mitomycin-C and beta-radiation can cause late scleral melting. Subconjunctiva steroid injection may lead to glaucoma. Long term complication of Bevazicumab is yet to be observed. Many surgical techniques are reported to reduce recurrent rate such as amniotic graft membrane and conjunctival graft. The most accepted method is excision with free auto-conjunctival graft from superior part of the eye. However, the superior part of the eye is the best site to do filtering surgery for glaucoma patient. When the conjunctival graft was taken from this area, scar is formed. The subsequent glaucoma filtering surgery can not be operated on this area. Also extra capsular cataract extraction will be difficult to perform and have higher complication rate. The new technique reported in this issue by Associated Professor Pornchai Simaroj had benefits for surgeon to save a lot of time. In free graft technique, in order to harvest the graft, patient has to look very far down. In this technique, patient does not have to strain the eye by looking down for long period of time, since the donor site is closer to the expose area. And for the surgeon, it is a lot less difficult to harvest the graft. In free graft technique, the graft is very thin. It usually shrinks or folded. In this new method, the graft will be easier to operate because one side of it does not move. Suturing the graft will be more convenient. Since the graft already has blood supply, melting of graft is less likely to occur. Most important advantage of this technique is it preserves the superior conjunctiva, (ophthalmologist always quote it as a virgin area) for possible future ocular surgical procedure.