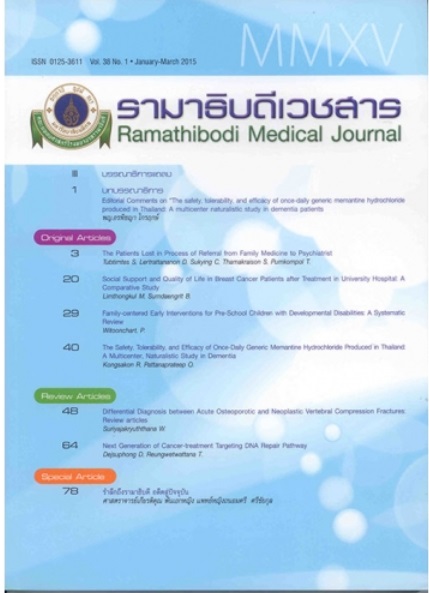 Objective: To analyze the health problems of the lost patients who did not see a consultant psychiatrist and to study the views of stakeholders.

Methods: Mixed method were a review of 69 medical records that were consulted to psychiatrists and interviews in both groups. The telephone data interviews with 19 lost patients and in-dept interviews with 26 physicians and staffs were collected by tape record. Data were analyzed by percentage and content analysis.

Results: There were 24.64% the lost patients. They were as well as patients who didi not go to the appointment and not to contact psychiatric unit. The most ploblems were depression (23.53%) and variety ploblems such as psychiatric ploblem, stress, anxiety, panic disorder and insomnia. The reasons in denying the psychiatrists included: 1) the idea that the patient was mad only to come to psychiatry, 2) they did not consider themselves sick, 3) fear and shame their own image and appearance, 4) the long queues. Their risks were not only did not care, but also increased severity. It impacted their family, works and interact with others.

Conclusion: The lost patient ploblems are risk that can be prevented. Good perception of psychiatric care is an important for approach. So two-way communication with the understanding. listening, beliefs and attitudes of patients towards psychiatrists was an approach to establish acceptance ploblems and treatment. It should be done with explain why referrals made.

Hameli AA. Seeing a psychiatrist does not mean you are insane. Available from: http://blogs.thenational.ae/others/my-year-at-the-national/seeing-a-psychiatrist-does-not-mean-you-are-insane

Uneanong S. When we see a psychiatrist?. Available from: http://www.infomental.com/seepsychiatrist.htm

Promseeda C. Psychiatric care in the community. Available from: http://www.jvkk.go.th/research/article/detail.asp?code=2