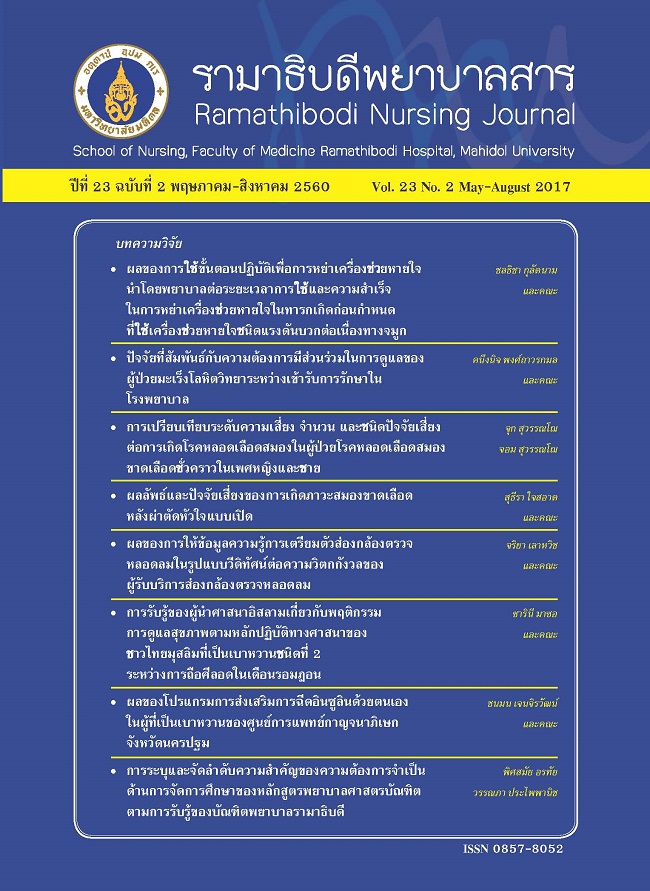 The purpose of this retrospective research was to study outcomes and identify risk factors of stroke after open heart surgery. The sample was 192 cases drawn from among patients who underwent open heart surgery from January 2009 to December 2015. There were 48 stroke cases that were matched on age and gender at a 1:3 ratio. The data of postoperative open heart surgery stroke were collected from outpatient department cards online. Data was analyzed using descriptive statistics including frequency, percentage, mean, and standard deviation, while analytical statistics including odds ratio, chi-square test and fisher exact test were used. The results showed that the incidences of postoperative stroke after open heart surgery were 1.75 percent, the mortality rate was 20.83 percent. This study also revealed that patients’ mortality rate with postoperative stroke was 5.2 times more than the none postoperative stroke. The average length of stay (LOS) of patients with postoperative stroke was 39.3± 23.59 days and that it (LOS) increased 2.1 fold. In addition, the risk factors during the pre-operative period were co-morbidity, past illness history and the severity of New York Heart Association (NYHA) functional classification.Co-morbidity included prior cerebrovascular disease and atrial fibrillation (AF). Past illness history prior open heart surgery. The severity of NYHA functional included class III and class IV.The risk factors during peri-operative period were the cardiopulmonary bypass (CPB), duration of CPB more than 2 hours and the use of intra aortic balloon pump. The risk factors during post-operative period were postoperative new AF and postoperative new AF with low systolic blood pressure. In conclusion, the results of this study could be used to develop a nursing care plan for high risk group in order to decrease mortality, morbidity and cost.