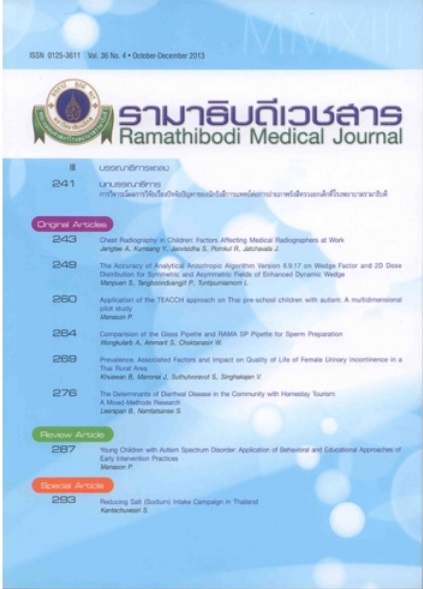 Objective: To improve quality of work in performing chest radiography in children, we aimed to study factors/problems affecting medical radiographers during their work.

Methods: A total of 46 radiographers answered the evaluation sheets which include their demographic data; the children’s age range that caused problems; factors or problems related to patients (children), parents, overall service, the radiographer themselves, along with other problems observed during their work. The factors/problems were scored as 1 to 5 (least serious to most serious). All data were analyzed in the term of frequency, percentage, mean value, including standard deviation using the software STATA 11.0.

Conclusions: While performing chest radiography in children; the problems occurred most seriously with children aged

2 - 4 years. The factors/problems that most serious are the child’s movement and the parent’s anxiety, which resulted in delayed service to the next patients. The radiographers themselves also had a feeling that taking chest radiograph of a child was a difficult task.