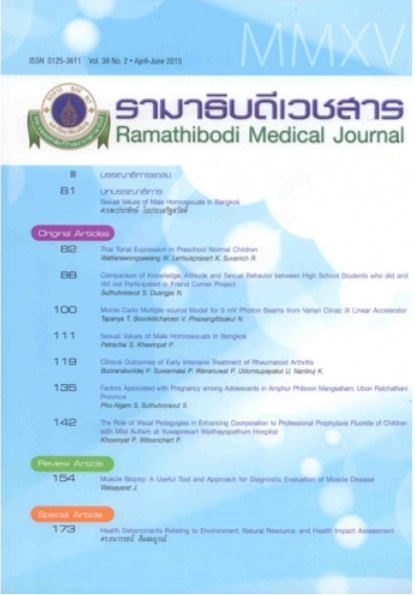 Background: Male homosexuals are common in Thai society. They tend to have problems in biological, psychological, and social adaptation. Problems in sexual expression and behavior are still important issues in Thailand.

Methods: This research is survey research to study the characteristics, attitudes and sexual behavior of male homosexuals in Bangkok. Data collection was done from December, 2012 to February, 2013. The sample comprised 250 male homosexuals who were referred by their friends. They responded to questionnaire constructed by the researcher. Data was analyzed by descriptive and analytical statistics, using chi-square with a significance level of 0.05.

Results: The results showed that homosexuals could be classified by sexual role into 3 types, i.e., 115 (46.0%) always male (insertive type), 18 (7.2%) always female (receptive type), and 117 (46.8%) were both or interchangeable. Many of them were 40 - 49 years old (32%), had an education level at high school (50.4%), were a student (49.2%), had incomes between 5,000 - 10,000 baht/month (34%), were sexually influenced by the internet (69.2%), consulted their teacher about sexual problems (32.8%), had first sexual intercourse at the age of 19 - 22 years old (31.6%), sexually expressed using makeup and feminine dress (51.2%), and thought homosexuality is normal (52.4%). We compared the characteristics and attitudes between the insertive group and the receptive or interchangeable group and found significant differences. The receptive or interchangeable group significantly talked femininely more often in pubs or bars, consulted friends about sexual problems more often, and had sexual relationships for benefits or money more often.

Conclusion: In conclusion, male homosexuals in Bangkok could be classified mainly by their sexual role as insertive and receptive or interchangeable. Their means and places of sexual expression, reasons for having sexual relationships, and person with whom they consulted for sexual problems were significantly different. However, their attitudes towards their sexual role were not different. They were satisfied with their sexual role and felt more accepted by society.