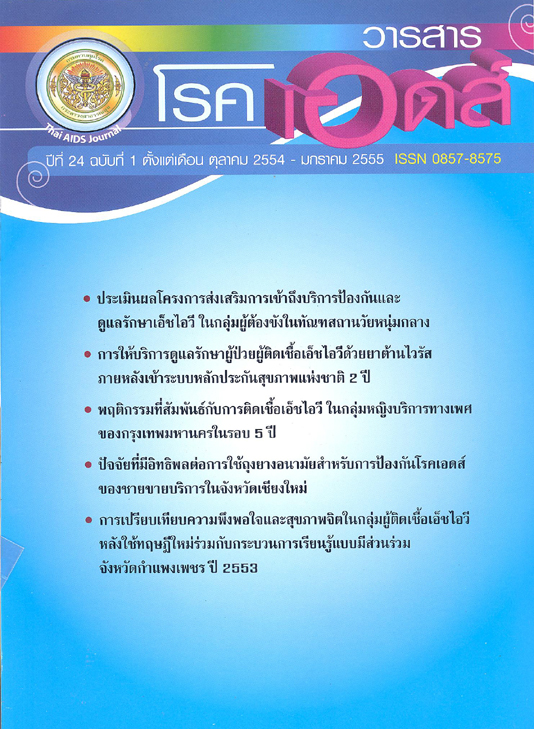 Since 2007 the Bureau of AIDS, TB, and STIs, Thailand’s Ministry of Public Health has conducted the project “Increasing Access to HIV Prevention and Care in the Correctional Settings”. The Bureau has conducted a baseline survey among male prisoners in the Correctional Institution for Young Offenders on HIV risk behavior and gaps in HIV related services in correctional setting. The results showed that there were needs for HIV prevention program in prison as most prisoners were engaged in HIV risk behavior while HIV intervention program in prisons were restricted and segregated. The assessment data was used to design intervention package such as, HIV orientation and sensitization for prison guards, training for trainers, peer educator development, peer education, condom distribution, developing peer educator corner in each residential facility, educational material development, and promoting linkage between prison and local hospital. After two-year implementation, the project collected data on HIV risk behavior among 600 prisoners again to assess the intervention effect.

Objective: To explore risk behavior and factors contributing to HIV infection and sexually transmitted diseases among prison inmates and to evaluate the intervention effect.

Methods: Six hundred male prisoners were randomly selected, proportional to each compound size, and invited to participate in this survey (with the prevalence rate of 5 to 3.3, using 95 percent confidence interval). The participants were asked to fill in electronic questionnaires in hand-held computers. The 70 questions with skip pattern explored demographic information, prison history, STI knowledge, HIV risk behaviors, and experience with health services and HIV peer education activities.

Results: The majority of participants were at 25 years of age, with the median age at 24 years. Most were married (77%), with primary school education (42%), living in the central region (36 %), working as day labors before incarceration (57%), and imprisoned for the first time ( 73%), and charged on narcotic drug abuse (59 %). These participants were significantly different from participants in the baseline survey. Proportion of participants in the post evaluation survey who scored above the mean score on STI knowledge was 61%, as significantly higher compared to 46% percent of such group in the baseline survey (P=0.000). Furthermore, participants in the post intervention survey were less likely to engage in HIV risk behaviors as compared to baseline-survey
participants, such as, anal sex with men, condom use, condom access, sharing tattoo equipment, and penile modification. Most participating prisoners were satisfied with the project and more than 80% were aware of the activities, peer educators, and having been exposed with peer education messages, peer education corners, and agreed that the project should continue.

Recommendation and lessons learned: The key factors to the intervention success include commitment and involvement of prison guards and prisoners, and the use of peer educators developed from prisoner volunteered.

Department of Corrections, Ministry of Justice, Thailand. Prisons and Correctional Institutions Statistic as of September 31, 2009.