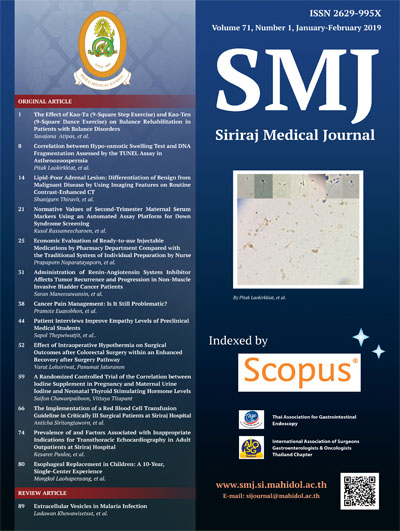 Objective: Automated chemiluminescent immunoassay has several advantages over manual ELISA with comparable
test performance. Few studies have reported the reference values of the second-trimester serum markers maternal
serum alpha-fetoprotein (AFP), human chorionic gonadotropin (hCG), unconjugated estriol (uE3), and inhibin
A (Inh A) by automated immunoassay in Asian population. Accordingly, this study aimed to determine the
median values of second trimester serum markers as a function of gestational age (GA) in Thai population using
an automated immunoassay.
Methods: This prospective cross-sectional study of serum markers in healthy singleton second trimester (14-22
weeks) pregnant women was conducted at Siriraj Hospital from September 2012 to April 2015. Maternal serum
AFP, hCG, uE3, and Inh A were analyzed by automated immunoassay. Predicted median values as a function of
GA were calculated from best-fit regression equations.
Results: A total of 1,526 women were included. Median values serum markers were constructed from the following
optimal models: AFP (ng/mL) = 99.082 - 14.195 GA + 0.662 GA2, r2=0.995; hCG (mIU/mL) = 390168.106 - 35
968.397GA + 876.708GA2, r2=0.972; uE3 (ng/mL) = -3.388 + 0.274 GA, r2=0.997; and, Inh-A (pg/mL) = 1206.875 -
114.171 GA + 3.174 GA2, r2=0.882. Using the same platform analysis and maternal weight adjustment, the reference
values in Thai population were shown to be different from those of other ethnicities.
Conclusion: Median values of second-trimester serum markers for Thai population were determined. Maternal
weight and the use of population-specific normal values have to be taken into account for Down syndrome screening
in the second trimester.