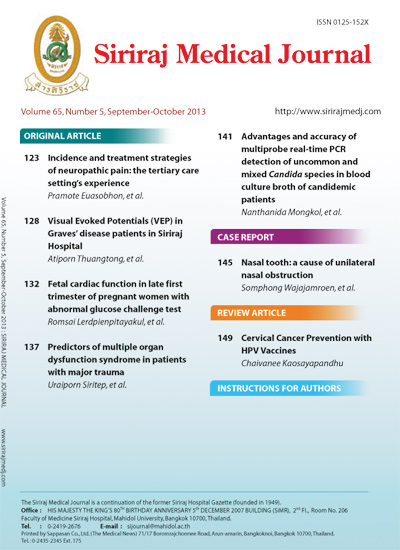 Objective: To compare fetal cardiac function during 12-14 weeks of gestation between normal pregnant women and pregnant women who have abnormal 50 gm glucose challenge test (GCT) including gestational diabetes mellitus (GDM).
Methods: Thai singleton pregnant women,12-14 weeks of gestation, who have no clinical risk factors of GDM and those with abnormal 50 gm GCT including GDM were enrolled. Fetal cardiac function parameters were evaluated by Doppler ultrasonography.
Results: One hundred and thirteen women met the inclusion criteria. Sixty one women were the control group (no clinical risk factors of GDM), whereas 52 were the study group which was then divided into 2 subgroups: 37 women with abnormal 50 gm GCT, who did not meet the criteria for diagnosis of GDM confirmed by 100 gm OGTT and 15 women with GDM. In the control group, the average values (mean+standard deviation) of right E/A ratio, left E/A ratio, right myocardial performance index (MPI) and left MPI were 0.56±0.06, 0.53±0.06, 0.49±0.08 and 0.48±0.09, respectively. No significant differences of all fetal cardiac function parameters in the first trimester were observed between groups.
Conclusion: Fetal cardiac function in late first trimester of pregnant women who have abnormal 50 gm GCT including GDM appeared normal.