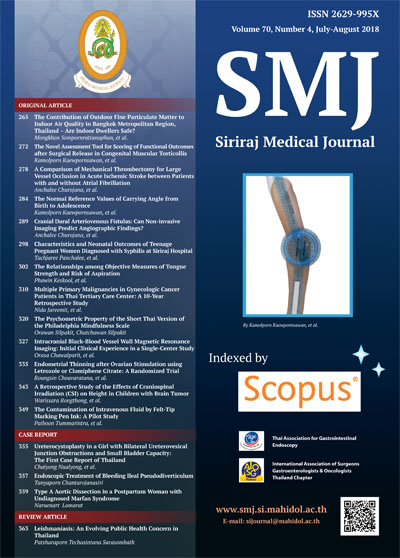 Objective: To investigate the incidence, pathologic features, clinical characteristics, oncologic outcomes, and
prognostic factors in gynecologic cancer patients with multiple primary malignant tumors (MPMT).
Methods: This single-center retrospective study included the medical records of gynecologic cancer patients
diagnosed with MPMT according to Warren and Gates’s criteria who were treated at the Division of Gynaecologic
Oncology, Department of Obstetrics and Gynaecology, Siriraj Hospital during January 2006 and December 2016.
Relevant demographic, clinical, and pathologic data were collected and analyzed.
Results: Of 8,076 cases of gynecologic cancer during the study period, 146 women with MPMT were included.
Ninety-four women had multiple primary gynecologic cancers (MPGC), and 52 had gynecologic cancer coexisting
with non-gynecologic cancer (GNC). The prevalence of MPGC was 1.2%. Synchronous cancer, nulliparous,
premenopause, and early stage of endometrial and ovarian cancer were significantly more common among MPGC
than GNC. Five-year recurrence-free survival (RFS) was significantly longer in the MPGC group (87.3% vs. 79.6%).
Coexisting endometrial and ovarian cancer was the most frequently observed MPGC, with a 5-year overall survival
(OS) and RFS of 98.1% and 86.0%, respectively. Specific to this cancer combination, residual tumor and depth of
myometrial invasion were found to be independently associated with shorter RFS.
Conclusion: The prevalence of MPGC in this study was 1.2%. Five-year RFS was significantly longer among MPGC
than among GNC. Three-quarters of MPGC patients had synchronous endometrial-ovarian cancer. Residual tumor
and the depth of myometrial invasion were identified as prognostic factors that were independently associated with
RFS in the patients with synchronous endometrial-ovarian cancer.