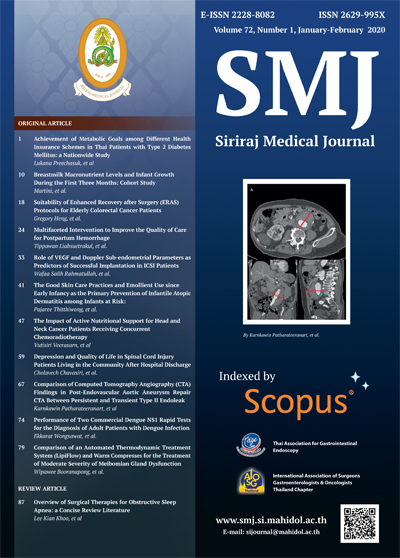 Materials and methods: This retrospective study enrolled patients who underwent EVAR and were diagnosed with type II endoleak from first post-operative CTA during January 2005 to October 2017 at the Department of Radiology, Faculty of Medicine Siriraj Hospital, Mahidol University, Bangkok, Thailand. Aneurysmal sac size, aneurysmal sac growth, and endoleak were recorded among patients whose endoleak disappeared within 6 months (transient group), and among patients whose endoleak persisted for more than 6 months (persistent group).

Results: Eighty-eight patients with a mean age of 75.3±7.3 years were included. Of those, 12 and 76 patients were in the transient group and persistent group, respectively. There were 71 males and 17 females. Univariate analysis showed number of feeding arteries (odds ratio [OR]: 9.9, p=0.012) and presence of inferior mesenteric artery (IMA) as an endoleak source (OR: 4.3, p=0.026) to be found more frequently in the persistent group than in the transient group; however, neither factor survived multivariate analysis. No significant difference between two groups was seen for endoleak diameter, endoleak complexity, or aneurysmal sac enlargement.

Conclusion: The number of feeder arteries and presence of IMA as an endoleak source on first postoperative CTA to be more likely found in patients with persistent type II endoleak. Further prospective study in a larger study population is necessary to identify any existing statistically significant differences and/or associations.