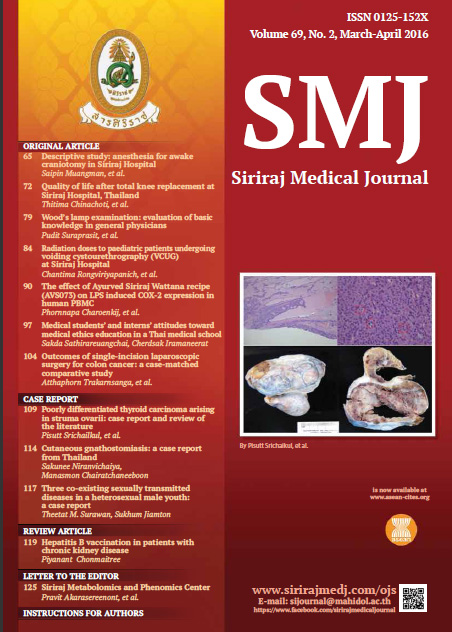 Objective: To investigate the anti-inflammatory effects of AVS073 via the expression of COX-2 in human peripheral blood mononuclear cells (PBMC) induced by LPS.
Methods: PBMC from healthy volunteers were treated with LPS alone, AVS073 alone (0.1-10 µg/ml) and LPS plus AVS073 for 18 hours. Cell proliferation was measured using MTT assay, while COX-2 mRNA, COX-2 protein and PGE2 production were assessed using real time RT-PCR, western blot and enzyme immunoassay (EIA), respectively.
Results: It was found that neither LPS nor AVS073 has effects on cell proliferation. The optimum time of LPS-induced COX-2 expression was 18 hours. Even the expression of COX-2 mRNA showed trends toward decrease in all concentrations of AVS073 treatment, it was not significantly different. However, the expression of COX-2 protein was significantly decreased by 10 µg/ml AVS073. Surprisingly, endogenous PGE2 was significantly increased, whereas exogenous PGE2 was not significantly changed.
Conclusion: AVS073 has some anti-inflammatory effects, probably at the level of post translational modification. Increase in endogenous PGE2 production, in spite of the decrease in the expression of COX-2 protein, may be due to the other factors or isoforms of COX.