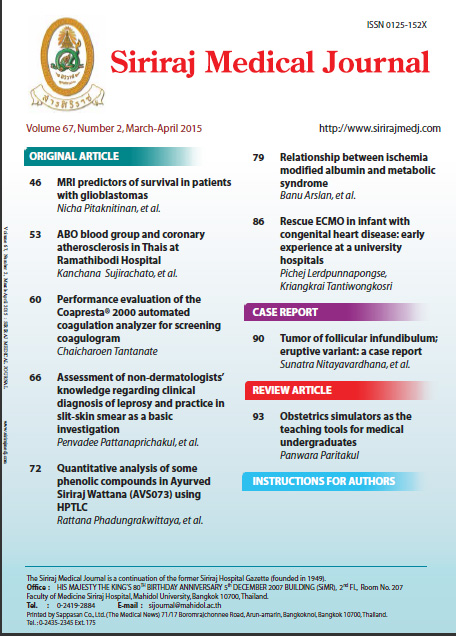 Background:  Leprosy is diagnosed based on cardinal signs.  According to this, patients with one or more of the following characteristic symptoms are suspected leprosy: hypo-pigmented or reddened skin lesion(s) with loss of sensation and/or involvement of the peripheral nerves and positive slit-skin smear for acid-fast bacilli.  Physicians who are not engaged in Leprosy work and no experience may fail to diagnosis it.
Objective: To evaluate the diagnosed ability of leprosy by identification of basic investigation and find related factors to correct diagnosis in general practitioners and non-dermatological specialists who attended annual short-course training in dermatology.
Methods:  During the year 2011-2012, 122 participants who attended  in short-course training in dermatology for general practitioners was annually conducted by the Dermatological Society of Thailand were evaluated  by pre-test answer sheets were retrospectively reviewed. These tests were composed of viewing a clinical picture of leprosy with a brief patient’s history. Participants were asked to answer three questions for a diagnosis, physical examinations and further investigations respectively.
Results: One hundred and seven physicians voluntarily turned in their answer sheets. Most physicians were female (75.7%). About half of the participants were aged between 26 to 30 years. Eighty-three of them (77.6%) were general practitioners and the rest (22.4%) were non-dermatologist specialists. Most of them were able to make a diagnosis of leprosy (60.7%) but only 15 (23.1%) participants could describe physical examinations completely.  Only 20 (30.8%) participants documented a slit-skin smear for an appropriate investigation.
Conclusion: Most of general practitioners and non-dermatologist specialists are able to diagnose leprosy. However most of them could not perform physical examinations completely and also lack of knowledge for a slit-skin smear which is a basic diagnostic tool for making a diagnosis of leprosy.

How to Cite
Bunyaratavej, S. (2015). Assessment of Non-Dermatologists’ Knowledge Regarding Clinical Diagnosis of Leprosy and Practice in Slit-Skin Smear as a Basic Investigation. Siriraj Medical Journal, 67(2). Retrieved from https://he02.tci-thaijo.org/index.php/sirirajmedj/article/view/55248
Issue
Vol. 67 No. 2 (2015): March-April
Section
Original Article