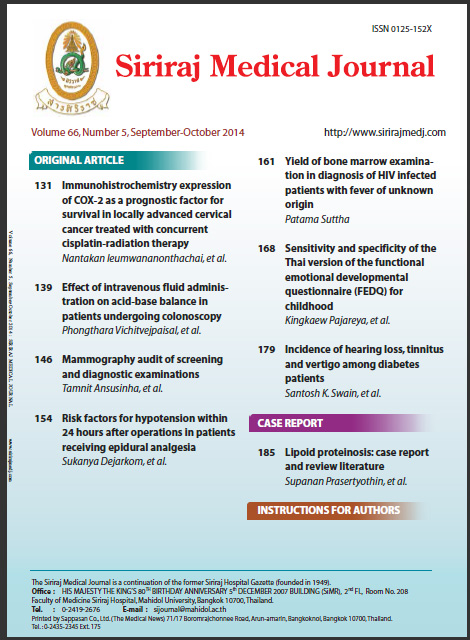 Objective: Common intravenous (IV) fluids to correct dehydration and acid-base derangement following bowel preparation are 0.9% Saline solution (SS), Lactate Ringer’s solution (LRS) and Acetate Ringer’s solution (ARS). Different IV fluids may have different effects on patient’s acid-base status, defined as pH or base excess (BE) or strong ion difference (SID). We studied the effect of alternative IV crystalloids on acid-base balance in patients undergoing colonoscopy by using SID as parameter.
Methods: Ninety participants were randomized equally into three treatment groups (LRS, ARS and SS). At the gastrointestinal endoscopy center, the basic blood test (T1) was conducted. On the day of colonoscopy, the second blood sample (T2) was obtained in either forearm before an allocated intravenous fluid administered. At the end of colonoscopy, the IV fluid was off and the third blood sample (T3) was taken from the non-fluid administered arm.
Results: Compared to T1 and T2, SID at T3 was unchanged after LRS and ARS but significantly lowered in patients with SS. The only significant statistical differences could be observed for SID at T3 between SS and LRS (40.67 ± 3.01 vs. 42.55 ± 1.60; p = 0.004) as well as SS and ARS (40.67 ± 3.01 vs. 42.58 ± 2.03; p = 0.006). Univariate analysis showed that SS alone was significantly associated with the development of acidosis (OR 11.00, 95% CI of 2.77 - 43.64).
Conclusion: With respect to maintenance of acid-base balance, LRS and ARS are preferable to SS for fluid replacement in patients with colonoscopy.

Registration number for the clinical trial: The trial was registered at ClinicalTrials.gov identifier NCT01250886 on 9 December 2012.