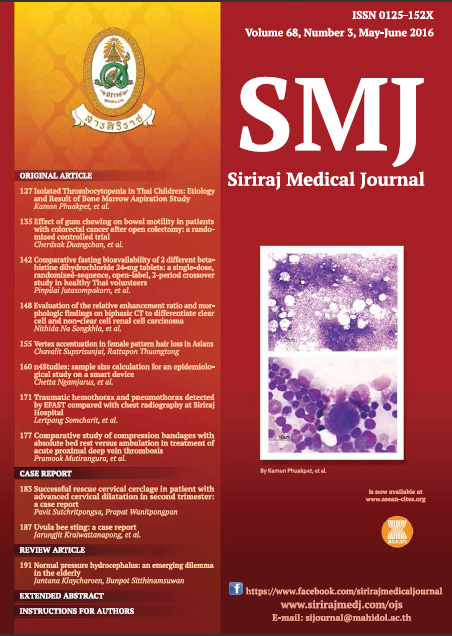 Objective: EFAST is the evaluation of thoracoabdominal injury in trauma patients. This study aimed to evaluate the diagnostic utility of EFAST for detection of traumatic pneumothorax and hemothorax compared to standard routine chest radiography at Siriraj Hospital.
Methods: From January 2013 to April 2015, 119 patients who visited the Division of Trauma, Siriraj Hospital were included in the study. EFAST was performed during the initial resuscitation of the injured patients and plain chest radiographs were obtained as routine hospital protocols. Patients’ charts were retrospectively reviewed and real-time EFAST examinations were compared to the results of chest radiographs. EFAST diagnosis was considered positive when there was an absence of normal sliding lung signs (pneumothorax) and presence of free fluid above the diaphragm (hemothorax).
Results: The sensitivity, specificity, PPV, and NPV of EFAST for the diagnosis of pneumothorax and hemothorax were 76%, 100%, 100%, and 93%, respectively, whereas the sensitivity, specificity, PPV and NPV of plain chest radiographs were 80%, 100%, 100% and 94.9%, respectively.
Conclusion: EFAST shows similar diagnostic accuracy compared to plain supine AP chest radiograph. The results are operator-dependent and higher accuracy can be achieved by well-trained emergency health care personnel. EFAST can be performed during resuscitation, and still provides promising results which can lead to early treatment procedure. Under experienced hands, EFAST is considered effective. This study suggests that it should be used as a complimentary procedure in all thoracic injured patients’ evaluations.