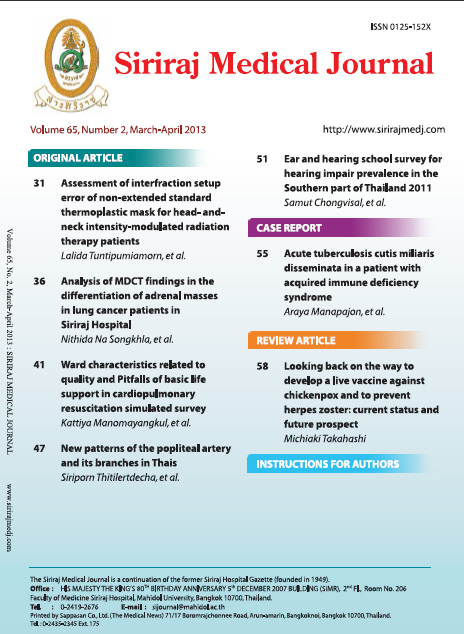 This study aimed to investigate the anatomical patterns of popliteal artery (PA) in terms of normal and variation
patterns in Thais. Two hundred and thirty legs of preserved human cadavers were dissected, and the pattern of PA and its
branches were identified by Kim’s classification. Pattern I-A was mostly found (88.7%), pattern I-B (modified) found 0.4%,
pattern I-C (modified) found 4.8%, pattern II-A1and pattern II-B found 0.9%, pattern II-A2 found 1.3% and pattern II-D
(modified) no result in Thais. Two newer patterns were found: pattern new-1 found 0.9%, and pattern new-2 found 2.2%.
Compared between genders and sides, all variations showed no significant difference. Regarding undertaking operative or
interventional procedures within the leg, this knowledge could be applied to prevent complications during the surgical approach
or percutaneous vascular assessment and might be one of the references of variation of these vessels in Thais.