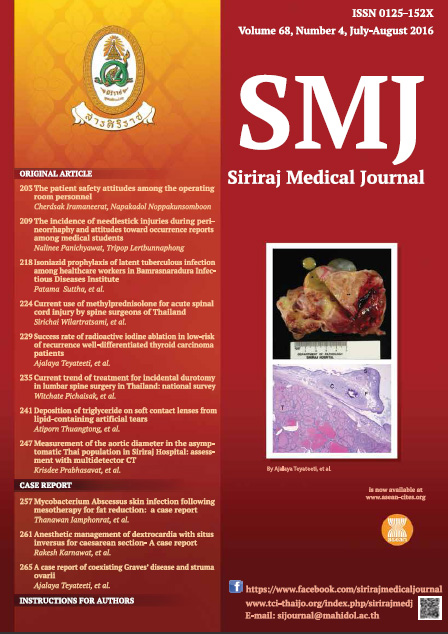 Mesotherapy is referred to as a minimally invasive technique by using intradermal or subcutaneous injection with liquid containing a mixture of compounds for the treatment of varying medical and cosmetic conditions. Although noninvasive cosmetic procedures gain increasing popularity, mesotherapy remains a controversial treatment according to lack of scientific standpoint, standard formulas, and treatment protocol. In addition, a wide variety of side effects from mesotherapy have been reported.

We reported a case of a 30-year-old Thai male, immunocompetent patient, who underwent mesotherapy for facial fat reduction at a private clinic and developed erythematous nodules on both cheeks 3 weeks after injection. The skin biopsy was then performed and histopathology showed mixed cell granuloma in deep dermis. Tissue culture was positive for Mycobacterium abscessus. He received a combination of clarithromycin and ciprofloxacin for six months with very good response. The nodules were healed with atrophic scar and post inflammatory hyperpigmentation without recurrence until eight months follow up.