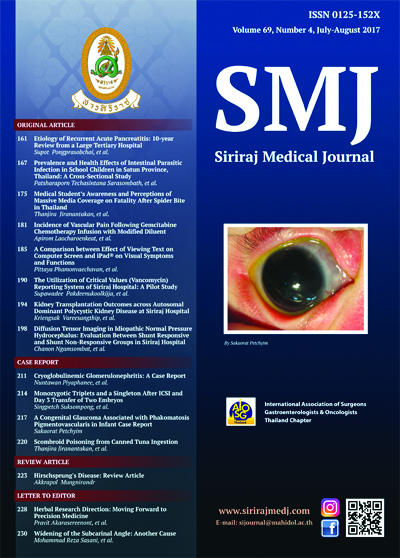 Background: Thailand has a population of 65 million. The estimated incidence of chronic kidney disease (CKD) patients is approximately 17%. Siriraj Hospital has performed kidney transplantations since 1973. With 43 years of experience, a total of 1,150 kidney transplantations (65.5% were deceased donors and 34.5% were living donors)
were performed at Siriraj Hospital. Autosomal dominant polycystic kidney disease (ADPKD) is the most prevalent, potentially lethal, monogenetic disorder with the prevalence of 1:500-1:1000 worldwide. It is the fourth leading cause of end-stage renal disease (ESRD). The characteristic of ADPKD is the enlargement of kidney from numerous cysts present on the renal tubules which gradually grow resulting in the decline of glomerular filtration rate (GFR)
and eventually turning into ESRD.
Objective: We aimed to study the outcome of kidney transplantation in ADPKD recipients at Siriraj Hospital.
Methods: Thirty-one ESRD-ADPKD patients (male 22, female 9) received kidney transplantation at Siriraj Hospital. Twenty-eight patients (90.3%) were deceased donors and 3 patients (9.7%) were living donors. All living donors were performed genetic tests, including linkage study and mutation test, to exclude ADPKD relatives who carried
abnormal PKD genes.
Results: The kidney allograft survival at 1-, 5- and 10-years were 81%, 81% and 54%, respectively. The results of patient survival at 1-, 5- and 10-years were 94%, 90% and 75%, respectively.
Conclusion: Kidney transplantation provides excellent patient and graft survival rates and is the preferred treatment option for patients with ADPKD and ESRD.