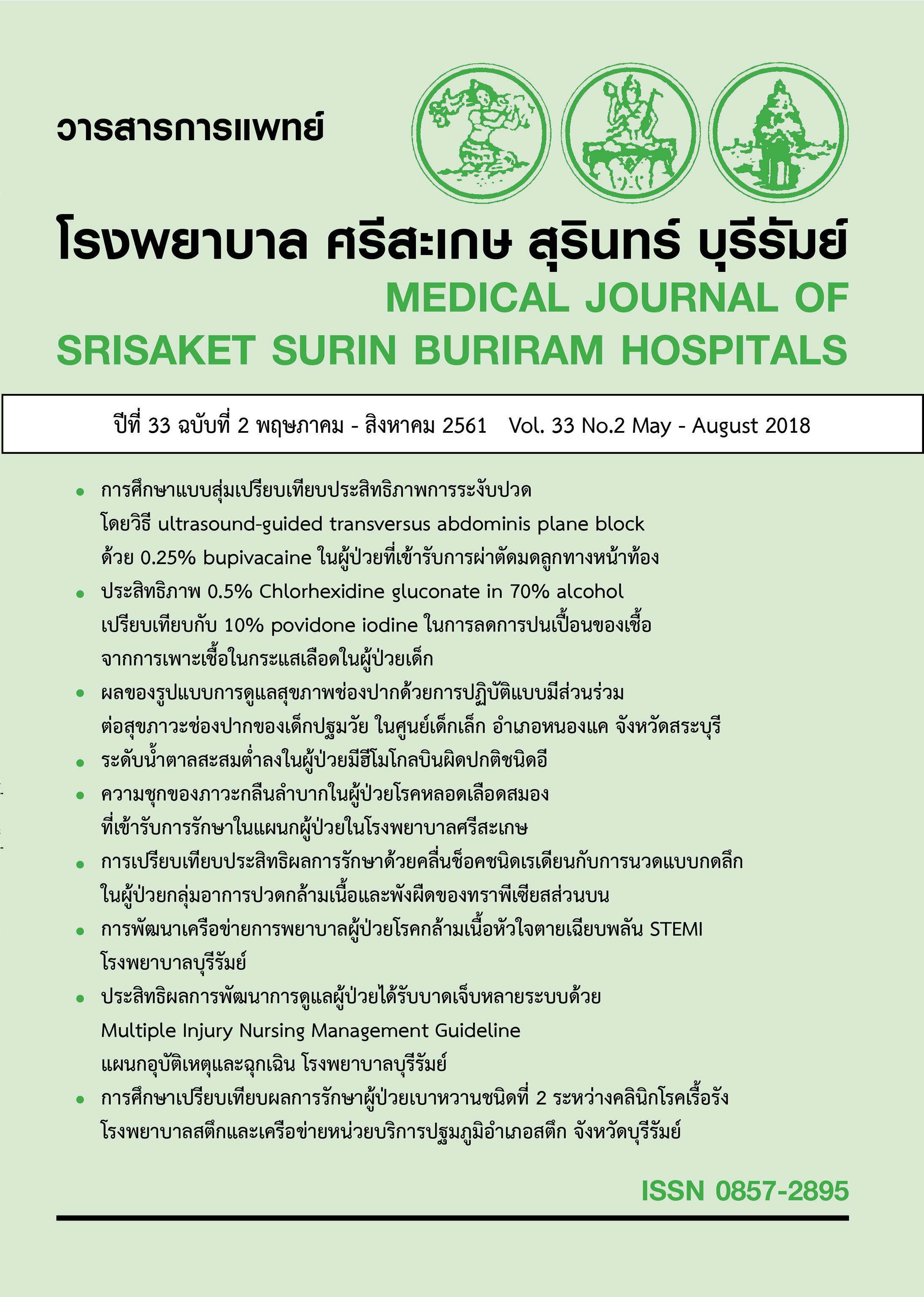 Purpose: To evaluate the efficiency of Radial Shock Wave Therapy (RSWT) in patients with Myofascial Pain Syndrome (MPS) in comparison to the efficiency of Deep Friction Massage (DFM)
Type of Research: Quasi-Experimental Research
The Place for Research: Rehabilitation medicine Department of Saraburi Hospital
The Sample Group of The Research: The patients who come to receive Myofascial Pain Syndrome at upper Trapezius muscle whom have been examined by doctors with the level 5 and the upper levels of pain; in total 60 patients divided into 2 groups, each group has 30 patients by choosing through simple random sampling.
Procedures: Dividing patients into 2 groups; each group contains 30 patients. Group 1, Patients were treated with RSWT machine: type DOULITH SD1 S/N BT 0495 using the head size 15 mm (R15), 2 Hz with power 2 Bars for 1,500 times at Trigger Point (TrP) of upper Trapezius muscles. The treatment’s frequency was once a week (Time spent: 10-15 mins) for 6 weeks. Group 2, Patients were treated with Deep Friction Massage (DFM) by the head of researchers (Estimating the hand pressure throughHand grip dynamometer, approximately 3 times = 39 Kg) at TrP of upper Trapezius muscle for once a week (Time spent: 10-15mins) for 6 weeks. Patients were taught to avoid bending down their head for long time and holding up heavy things. They were taught to sit in the right position for working. Between treating 2 groups of patients, the patients in 2 sampling groups had not received any other kind of treatment such as applying medicine, receiving medical injection, getting massages or receiving acupuncture. The evaluation of pain levels of 2 groups of patients during working and resting were tested to check the pain levels of VAS and compare of results of treatments in 1st, 3rd, and 6th times of patients in 2 groups. The satisfaction of patients for their post treatments after they have received 6 times of treatments in each group was also evaluated. There are 6 levels of satisfaction including 1. Excellent, 2. Good, 3. Moderate, 4.Low, 5.Very low, and 6.Indifferent for their daily routines and their occupations. The uses of medicines or other treatments in case that patients request to receive other kinds of treatments other than in the agreements was recorded. Post research, patients can choose other ways to receive their treatments.
Results: During resting, the treatment of MPS of the trapezius muscle in the upper part using RSWT could reduce pain until not pain after 5 weeks of treatment. The patients with DFM were recovered from pain after 6 weeks of treatment. After each week of treatment, the outcome of before and after were significantly different for all kind of patients. The reducing pain using RSWT was better than using Likewise, the satisfaction level of during working patients that treated using RSWT was the highest (96.7 percent), more than DFM group (76.7 percent). After 6 weeks of treatment, the recovery of pain to better life and work obtained by both treatment methods RSWT and DFM high both (DFM and RSWT) was in high level (83.3 %and 80.%, respectively)
Conclusion: It can be concluded that, in each treatment session, treating MPS at upper Trapezius with RSWT can not reduce pain during working as much as the treatment with DFM. Though, RSWT can in general after 6 weeks reduce pain during working faster than DFM because the pain after RSWT treatment does not usually bounce back to high pain level when the patient revisited for the following treatments. However, for pain during resting, RSWT and DFM treatment does not show any sign of significant difference. Therefore, DFM can be recommended to be used in hospitals and physical therapy centers that do not have RSWT equipment.
Keywords: Myofascial Pain Syndrome; MPS, Radial Shock Wave Therapy; RSWT, Deep Friction Massage; DFM, Upper Trapezius